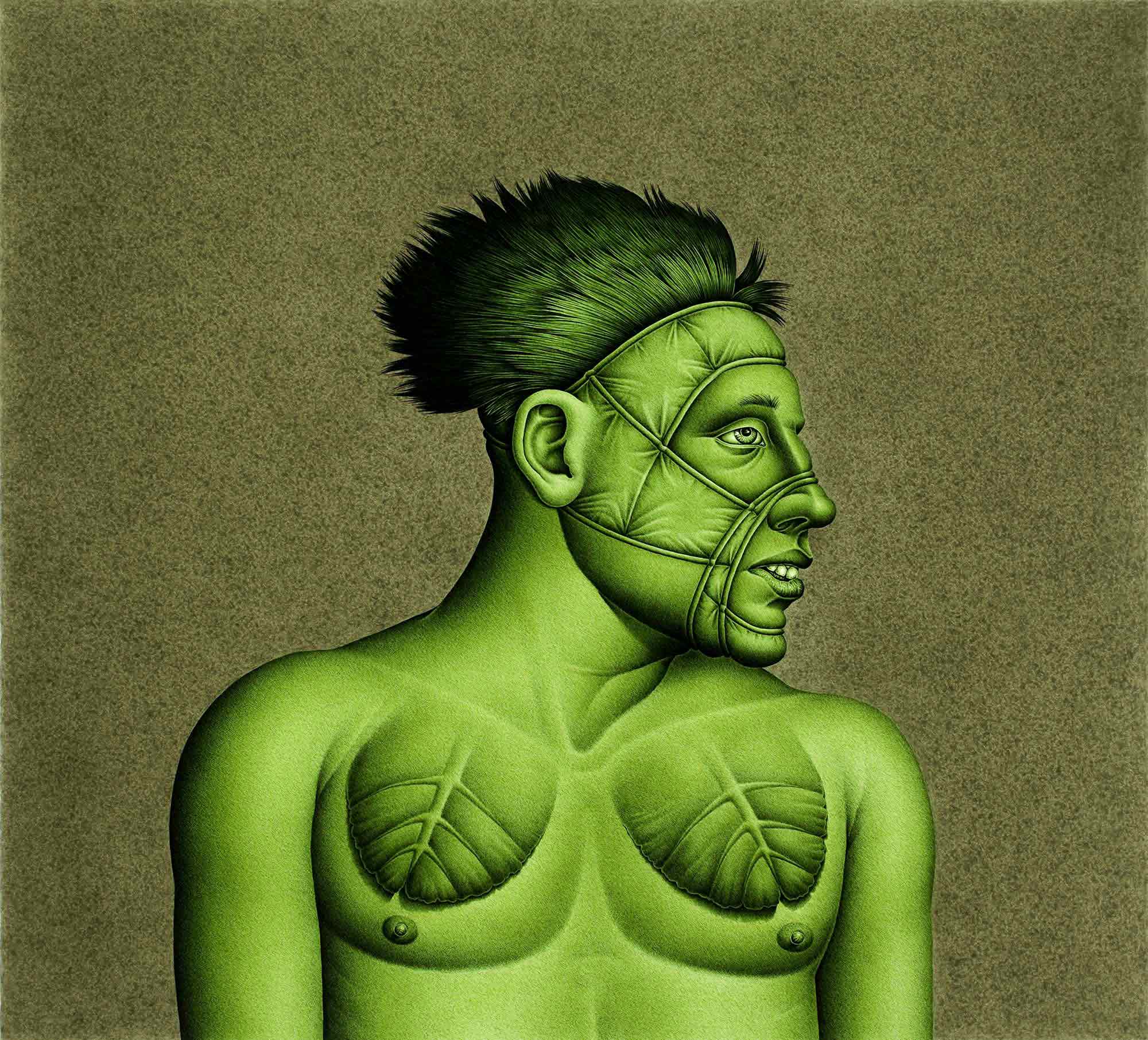 Trader of Green is an unusual portrait. Even though its format is a traditional close-up view of a figure shown from the front and with his head turned to the side, there are surprises. The figure is not wearing clothing that might indicate wealth or stature; rather, leaves on the bare chest combine botanical details with hints of human hearts and lungs. The black hair shares characteristics of feathers, the nose is pointed and beaklike, and the heavy-lidded eyes are a flat, pale green; in fact, the entire face and torso are green. The face is pulled taut by cords constricting the jaw and mouth so that the expression is not proud or confident, as with many traditional portraits, but rather wary and disheartened. The neck is large and forceful in contrast with the arm, which seems slender and insignificant, and the ear is disproportionately large.

There is no indication where this figure resides, as the background is neutral, composed of tiny patches of tan and gray. However, there is a spacious and textural quality to this surrounding realm, as if it is a transitional area between the habitats of birds and humans. Within this transitional space, in the real world, humans interact with birds by admiring their beauty and songs, as well as by hunting and capturing them for economic reward, and by altering and destroying their nesting and migrating territories. In the real world, humans also share biological and behavioral qualities with animals. Robert Lostutter says his vivid portraits of hybrid bird-men are self-portraits. He has said, “It’s a way of trying to say: We are these birds. They’re a part of us.” He also has interjected a mystery by titling the work Trader of Green. Who is the Trader?

Lostutter’s work process involves preparatory drawings and sketches based on observations of people and their distinctive features, as well as observations of tropical birds with their brilliant plumage. He begins his watercolors with a light wash of color, then layers each tone from light to dark. Finally, he paints the image again from dark to light. If he is not satisfied, he will paint it from dark to light again, taking two or three rounds to accomplish his goal.

Lostutter’s hybrid birdmen are within a long tradition of image-making with human-animal subjects. For thousands of years, artists have depicted the hybrid gods, demons, or tricksters of religions and cultural mythology around the world: the owl-beaked bird goddess of the Vinca culture in Neolithic Europe; the grotesque demon Pazuzu of ancient Mesopotamia; Anubis, the jackal-headed Egyptian god of death; the centaur and harpy of archaic Greece; Ganesha, the elephant-headed Hindu god of wisdom; and Chu Pa-chieh, a half-man/half-pig entity in Chinese mythology; as well as shape-shifter characters in African, Asian, and Native American traditions. Lostutter’s love of birds and his assertion that he is one with these natural beings are expressions of a common human yearning to fathom our bond with nature.

Beginning when he was five years old in Emporia, Kansas, Robert Lostutter spent many hours drawing with his grandmother, happily using her green box of Prismacolor pencils. From this experience he developed a belief that drawing is the foundation for art. He also learned to love birds through his grandfather’s and great-grandfather’s love for them. When he was seven he participated with his classmates in a club through which students could pay twenty-five cents a month to receive pictures of birds, often reproductions of John James Audubon’s Birds of America prints. Much later, during a trip to Mexico in the 1970s, Lostutter was attracted to the beauty of tropical birds of the region, and he imagined making paintings of humans fused with each of the birds in the world.

Born in 1939, Lostutter attended the School of the Art Institute of Chicago in the late 1950s and early 1960s. During his studies, he came to know a group of young artists who exhibited their art at the Hyde Park Art Center and become known as the Chicago Imagists. Lostutter never exhibited with the group but nonetheless shared their interest in figurative art based on popular culture and personal fantasy, as well their skilled draftsmanship and rigorous technique.

Lostutter’s process and relationship to nature