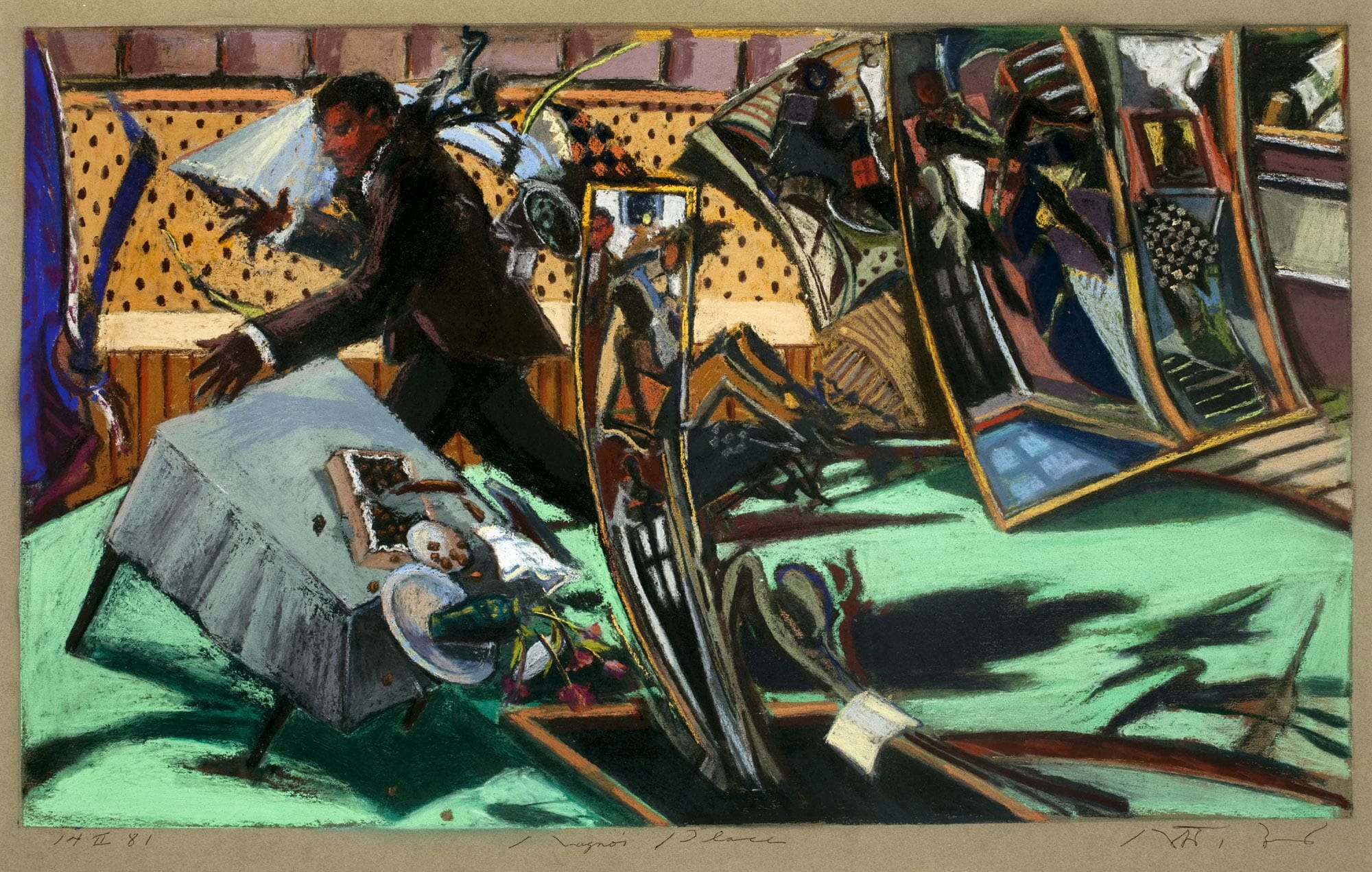 Unraveling Robert Barnes’ paintings, such as Ragno’s Place, is an exercise in sorting out how we arrive at “reality”. Even though his paintings are usually figurative and seem to tell a story, their stories are enigmatic and often steeped in obscure references to literature, poetry, or other artists’ works. Layers of information gradually capture the viewer’s attention in a process similar to the gradually increasing awareness of a situation. But Barnes’ paintings also simply invite us to look fully and closely and enjoy their lively colors and shapes while leafing through our own associations and ideas about their mysteries and meanings.

In Ragno’s Place, a male figure appears to be in a room that seems full of chaos, motion, and suggested action. A table next to the man has toppled, sending a blue vase full of flowers, a napkin, and food into the air. Objects seem to bend and float, lifting off of the floor and walls as if animated or tossed by an unknown force. The man’s arms are outstretched and he appears to be running or struggling for balance. Juxtaposed against the apparent tumult is a cohesion established by the artist’s use of modulated color, repeated shapes and patterns, and strong vertical and horizontal lines.

According to Barnes, this painting “deals with small embarrassments,” which, as he describes, “when one thinks about it, life is full of.” As he explains, the male figure is “a waiter who one evening swept into the room and slipped on something on the floor, showering the diners with the contents of the tray.”

Though Barnes’ works are often imaginary portraits of poets, artists, or characters in literature, Ragno’s Place emerged from the artist’s memory. It is based upon true events which occurred while Barnes was living in Italy and was in a restaurant that inspired the title of the work. The Italian word for spider is ragno: “Ragno refers to the restaurant owner’s nickname…he was always scuttling about.” It was in this place one evening that Barnes witnessed a waiter slip, fall, and unintentionally spill food on the diners. According to Barnes, Ragno “…was furious at first until one of the customers stood up and said it wasn’t the waiter’s fault. If anything it was the proprietor’s fault for not seeing that the floor was unsafe. The fellow then proposed a toast to the waiter. Everyone joined in with more toasts for the waiter who was eventually seated like an honored guest. Ragno caught the fever and announced wine gratis for all. The evening ended well for all.”

It was this chain of events, the chaos and the resolution, that caused Barnes to reflect on the range of possible reactions to a situation, and how a particular response may shape future events. Barnes states, “When one thinks about it, life is full of small mistakes and embarrassments…and reactions. When someone falls and seems unhurt do you ignore it in order not to call attention to the fact or does one show concern? There are all sorts of actions and reactions which are puzzling: the singers or performers who lose their way, lovers’ blunders…we all know this in our lives, and so I make paintings on the subject.” In Ragno’s Place, Barnes imaginatively portrays a particular event, but leaves the reaction to the viewer, engaging the power that we all have to perceive, interpret, and act.

When creating a new work, Barnes does not lay out a specific design beforehand. He begins by making loose gestural lines, and building those into sketches, which are then further developed with color until the work is finished. As he works, Barnes often considers a particular idea or theme, usually related to narrative experience. His intent is to reveal an outer world that is connected with inner experience. He presents objects and scenes ambiguously in a manner reminiscent of the Surrealist artists with whom he interacted, expressing an awareness of the mind’s influence on shifts and overlaps in lived reality. Barnes doesn’t try to perfectly represent a scene, but rather to convey a quality of inner experience congruent with the situation. He accomplishes this through an idiosyncratic mixture of invention and explicit imagery, as well as a masterful use of materials. His work is characterized by its intensity and range of color and gesture; the vividness and lively color composition engage and captivate the viewer’s eye.

Robert Barnes didn’t start off with plans to become a painter. In high school he devoted a great deal of effort to becoming a champion boxer, and he won the golden gloves award in his flyweight division at the Windy City Boxing Club on Chicago’s South side. After he graduated from high school, he and a friend went one day to the Goodman Theater in downtown Chicago, which was connected to the Art Institute of Chicago. Barnes was trying to obtain information from the theater about how to pursue his interest in acting. However, on that day, the theater was closed. While there, his friend decided to take an entrance exam to the School of the Art Institute of Chicago, so Barnes went along with him and spontaneously took the exam, too. He was awarded a scholarship to the school, which launched his career as an artist.

After graduating from art school Barnes moved to New York City, where he met and interacted with several leading Surrealist artists, including Marcel Duchamp, Matta and Max Ernst. Even though he hung around with them, he says he “couldn’t be like the surrealists. I certainly enjoyed their thinking, but I couldn’t go that way. I just did what I did and I still am. It makes you unpopular, maybe for a lifetime, but I’d rather do that than be popular and doubt what I am.” During this period he also joined the James Joyce Society where he explored his interest in the multilayered writings of Joyce and other great authors.

From New York, Barnes moved to London, where he interacted with other artists including Francis Bacon, Peter Blake and Richard Hamilton, and then to Kansas City where he taught at the Kansas City Art Institute. While there he developed his long-held interest in the American southwest, particularly in Native American art and mysticism. Ultimately Barnes settled in Bloomington, where he taught in the art department of Indiana University for 35 years. In the 1970s Barnes was able to take a two-year sabbatical to the Umbria region of Italy, and he incorporated into his art many influences from the literature and poetry of this country. Barnes relocated to the coast of Maine, where they now live in a 180-year-old sea captain’s house.