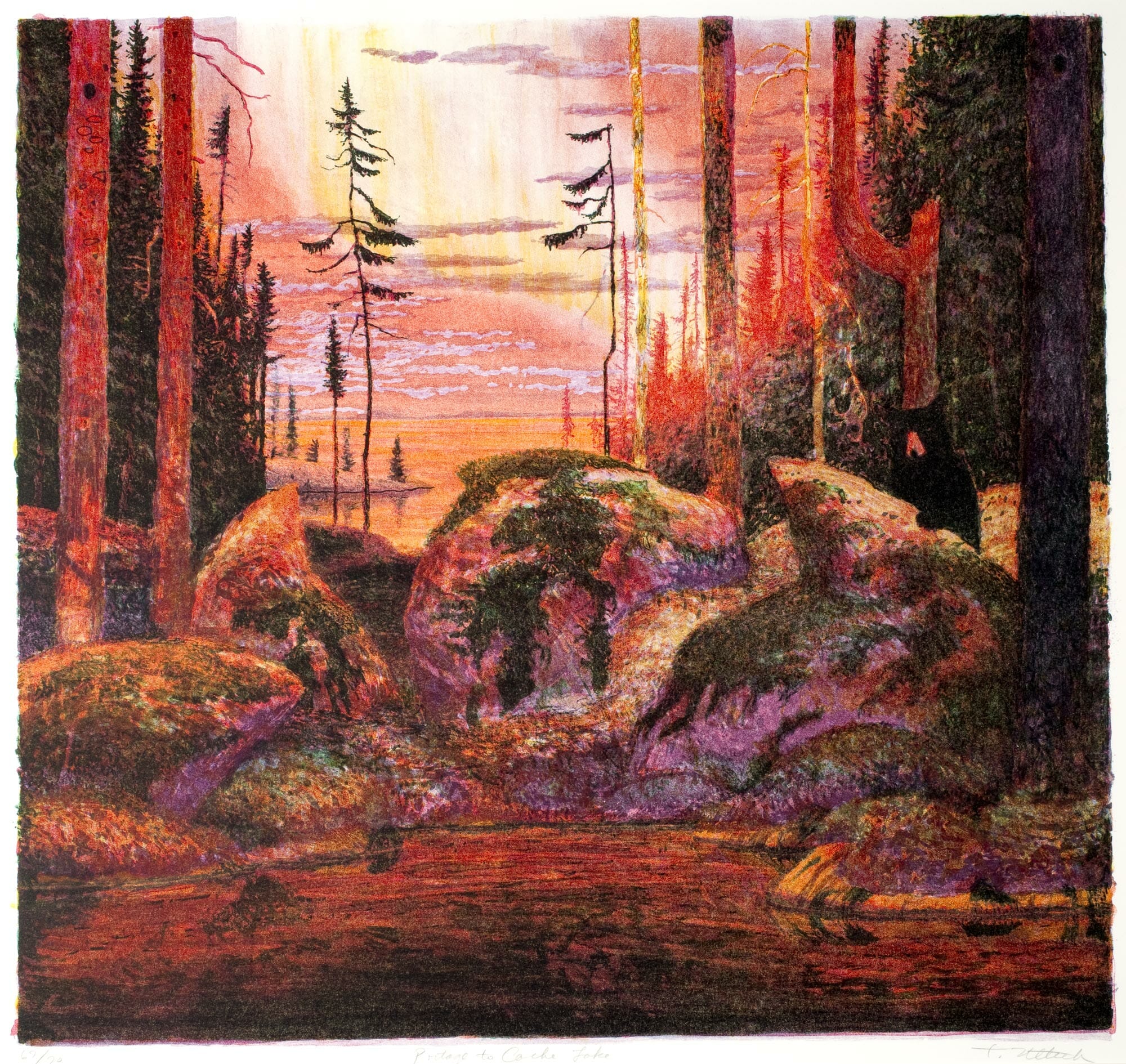 Students will learn about wilderness areas and apply this knowledge to compose a work of art that reflects their experience of natural areas in their local community. Students will examine wilderness concepts in an outside observation, in music, and in visual art.

Familiarize your students with the print, Portage to Cache Lake, using the following guided discussion:

In artist Tom Uttech’s print, Portage to Cache Lake, we are immersed in a northwoods scene of seemingly untouched nature. A bear looks out as us from behind a group of boulders, and we can imagine the fish and ground-dwelling creatures, insects, and other wildlife that occupy this wilderness. Is this place real? From what perspective has the artist depicted the scene? What might be the relationship of the artist to this place? The print at first appears to be almost photo-realistic; however, Uttech does not work from photographs, but rather from memory and intense bouts of observation.

Tom Uttech was born in 1942 near Wausau where his grandparents had a farm and a cheese factory. His family hunted and fished for part of their diet and Uttech still goes deer hunting, although now more for the experience of being in the woods than for actually hunting deer.

As a child, Uttech was drawn to art and biology, especially ornithology, which is the study of birds. He also grew to admire the music of Finnish composer Jean Sibelius (1865-1957), a composer whose music Uttech feels connects to the landscape of the far north. Uttech believes that, “a painting is right when it begins to sound like Sibelius.” (Mind and Beast: Contemporary Artists and the Animal Kingdom, curator and writer Tom Garver, Leigh Yawkey Woodson Art Museum, Wausau, 1992-93.)

Tom Uttech’s college education in the 1960’s came at a time when the art world was embracing Abstract Expressionism. This type of art pictured emotions and attitudes through bold colors and marks that were non-representational. Uttech struggled to find his personal style as he sought to follow the rules of abstract painting. Uttech finished his college education at the University of Cincinnati during the reign of Pop Art. Pop Art brought everyday life and popular culture back into art as artists borrowed from and adapted the look of magazines, TV images, ads, and comics. Uttech tried to integrate Abstract Expressionism and Pop Art into his “up north” upbringing which resulted in frustration and compromises that led him for a time to abandon art-making all together.

When Uttech eventually returned to drawing, he gradually brought animals and northern landscapes back into his work. In the 1960’s he began to make yearly canoe trips to the Quetico Provincial Park in Ontario, Canada. Before long he was returning to Quetico two and three times each summer. He remarked of those trips, “Being in the woods is the closest thing to a spiritual experience I have ever had.” (Garver, 1992-3). On these trips, Uttech learned to hold very still for hours at a time as he observed nature. He learned that if he became invisible eventually wildlife would enter the scene without sensing his presence. Although Uttech has taken thousands of black-and-white photographs of the Quetico over the years, he says he does not use their information in his art. Instead he relies on memory, improvisation, and imagination as he creates his mysterious and mystical pictures of the far northern wilderness.

This lesson suggests several ways a student might experience the concept of wilderness. Students will examine wilderness in an outside observation, in music and in art.

Students will start as a group by constructing a definition of wilderness. Students might imagine what their State or neighborhood looked like before the advent of European settlement. Were there any people? If so, who were they? What were their clothes and shelters like? How did early people get from place to place before roads existed? What did they eat? What did the land look like? Were animals the same or different? In what ways?

As a group, students will look carefully at Tom Uttech’s Portage to Cache Lake to see what is included in his version of the far northwoods. Where is texture used? What feeling does the sky convey? Does the landscape and bear look realistic? Why or why not? Has the artist included vertical, horizontal, and diagonal lines? What things do these lines point to? What are the most important parts of this picture? Have humans lived in the wilderness that Uttech has painted? If so, who?

Artist Tom Uttech’s primary theme is the exploration of wilderness. He accomplishes this by traveling alone to Canada. In the classroom that is more difficult; however, it may be possible to approximate his process by dividing students into small groups and traveling to a local site such as a school forest or city, county, or state park. While in their groups in nature, students should remain silent and complete an observation with their senses of sight, hearing, and smell. Teachers may want to practice totally silent observation in the classroom before proceeding with an outdoor session. (It would be possible to complete this lesson working from color photographs but that option loses some of the experiential value of sound, or lack thereof, and smell.)

Students will listen to “wilderness music” (Jean Sibelius, R. Carlos Nakai, or a computer search for “musicians who are influenced by wilderness” to make another choice). Students may also read student-level books about Henry Thoreau, John Muir, or Aldo Leopold in preparation for their experience. In a totally silent “wilderness observation,” students will document things seen, smelled, and heard on paper. Students should be especially focused on visual observation since they will do a drawing based on the tiny details they have noticed when they return to their classroom… and they will be working from memory.

Students will return to the classroom and create a work of art based on their experience. They will start by sketching very lightly in pencil on white, 9 x 12-inch or 12 x 18-inch paper. Their composition must include horizontal, vertical, and diagonal lines. All space must be used… no empty areas! Nature does not have empty spots, as Uttech has discovered. Students will slowly begin to color their compositions preferably using oil crayons such as Sketchos or Craypas so blending is possible. If the classroom does not have access to oil crayons, colored pencils will work although it is more difficult to achieve saturated color with these drawing tools. Demonstrate how to blend colors starting with lighter colors in the background or on the first layer of any given object. Students may want to rest their hands on paper towels as they work to avoid smearing the pastels. Build up colors from light to dark; add patterns and textures—Uttech is famous for his tiny brushstrokes and wonderful textures. Students can clean their oil crayons by rubbing dirty tips on paper towel when necessary. Keep revisiting Portage to Cache Lake as a reference. Revisit the “wilderness musicians” you have presented earlier as students work.

Oil crayons (Craypas or Sketchos are two common brands) or colored pencils, drawing paper, pencils, erasers, access to nature, access to a library for books and computers for musical search